Allah says in a hadith qudsi (holy tradition, a saying attributed to, or anecdote regarding Prophet Muhammad [peace be upon him], according to traditional eyewitness accounts), “I created some of My servants for my zat (essence; person).” The Sufi’s goal in life is to achieve an intimate understanding of and love for God. Tasawwuf, known in the West as Sufism, is a process of attaining closeness to the Creator through love, which is attained by purification of the nafs (egoistic or animalistic nature). Such a loving relationship with Allah, held by many prophets and other saintly individuals throughout history, may be achieved by anyone who sincerely wishes for it and is willing to undertake the discipline necessary to achieve that state.

The underlying tenet of Sufism is that human beings were created to know Allah and to manifest His attributes while living on this earth. Tasawwuf is a method and way of life that enables one to become insan-i kamil, a true human being who has realized intimacy with his Creator. When his or her spiritual potential has been achieved, a human being is fit to be Allah’s khalifa (deputy) on earth, as Allah intended, according to the Holy Qur’an. 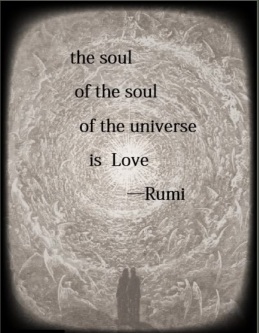 The believer who yearns for something deeper than the promised reward of eternal salvation for good behavior is faced with a challenge which springs from within. Happiness for him is not achieved by clinging to the hope of endless delights in Paradise, nor is he motivated toward being good in order to avoid the agonies of hell. Consciously or unconsciously, this seeker is after absolute truth. It is the inner man who remembers when he was not separated from his Lord, and now longs to be reunited with his true Beloved. Although in fact no real dichotomy exists, the mind learned to create a separate entity of itself, wrapped up in human flesh, when the self was born. This seeker craves for the conscious realization of what his heart already knows – that he is connected very intimately with the essence of Allah, and in fact his true nature lies in the experience of knowing that ultimate reality. The task at hand thus becomes to discover where his “self” fits in relation to Allah’s unlimited Being.

As for those who strive for Us, We will definitely guide them to Our paths and (then surely you will see that) Allah is with the doers of good. (Qur’an 29:69)

According to a Sufi saying, “Heart is the sultan,” because that is where Allah makes His presence known in the human being. Love is the medium of unity, the process through which the electromagnetic vibrations produced by the heart and mind are working in tandem, thereby setting up the optimum scenario for spiritual learning. Tasawwuf, known in the West as Sufism, is the process through which Allah, through the shaykh, clears the path into the depths of the seeker’s heart, which is the seat of divine union, and therefore the “house” of God.

The human being’s conscience is the voice of the ruh (spirit; soul) making itself heard in his heart. For the Sufi, expanding one’s consciousness means directing his or her attention to the wisdom of the heart, because knowledge from Allah is broadcast to that center of his being. The goal of tasawwuf training is to be able to hear Allah’s voice in the heart, and for a loving relationship with Allah to develop in that site of spiritual interchange. The mature human being makes his choices based on the information housed therein, using his aql (rational mind; intellect) as the arbiter of messages and information that come through. Many notions may spring up, but it takes a mature human being to be able to differentiate among them and recognize the sources of such communications.

In the material world of proofs, Allah has made moral distinctions for human beings so that they can choose good and avoid evil. The wisdom on which good action is based is learned in three ways: by hearing of or reading about universal truths, by observing these truths in action or experience, and directly from Allah. It is Allah within that the Sufi strives to touch. Sufis wish to be with Allah in the same intimate way that lovers are united. All of creation serves Allah, willingly or unwillingly. Sufis wish to serve Allah willingly, knowingly, and lovingly. That is why Sufism is called the way of the heart, designed to bring the human being to his ultimate objective of loving intimacy with Allah.

When the heart is clean, the inner spiritual senses come alive to balance the outer senses. The mature Sufi’s heart has become identified with Muhammad’s (peace be upon him) heart, which is in constant rapport with the essence of Allah. It is aligned with Allah and the entire universe, and has, in a sense, become the universe. Through such a heart Allah sends His mercy to creation. The Sufi functions as a servant of Allah in this material world in an active way, through beneficial action, and in a passive way, as a conduit for Allah’s mercy. In this way the Sufi is said to follow in the footsteps of Muhammad (pbuh).

Try to serve people as much as you can. Be merciful to the feeble elders. Feel sorry for the state of the poor when you are rich and give them much sadaqa (alms; charity). With sadaqa, balas (calamities; misfortunes; trials) are dismissed by Allah. Show hospitality to the guest, because our Prophet, peace be upon him, has accepted this as ibada (worship)

Husn-i akhlaq (good behavior) is the best of deeds. It is said, “If you cannot make people happy with material things, make them happy with good akhlaq (manners, habits). The best of good deeds is good akhlaq.”

The people who have good akhlaq can attain the same level as people who worship and fast, without doing anything else. Good akhlaq is the best ibada after [next to] Allah’s fardz (compulsory) ibada.

If you do ibada in an irritable state, what good will it serve? Allah is not in need of anyone or anything. He is Al Ghani (The Self-Sustaining One). At the door of servitude, what befits the servant is to wait at the door selflessly. When you are appealing to the Presence of Allah, you must be humble, in a state of fear and awe, admitting your powerlessness and poverty. If you go to the door of Allah, putting your deeds and your nafs (egoistic self; man’s animal nature) aside, with utmost humility, then maybe you will be accepted.

– from Guidance to Mysticism, translated by Shaykh Taner Ansari in Grand Masters of Sufism

One of the most treasured practices of the Sufi path is zikr, the remembrance of Allah. To be in unity with Allah is to be in a constant state of remembrance of the source of all creation. In the sense that unity is the deepest state of surrender to Allah, this is the true zikr, and is the goal of the Sufi path. As a means to achieve that state, zikr as a ritualized practice was bequeathed to students of tasawwuf (Sufism) by Prophet Muhammad (peace be upon him).

Hazrat Ali (may Allah be pleased with him) was the first one to ask the Prophet (pbuh) about the path of zikr. He asked him to teach him the closest, most precious, and the easiest way. Upon this, the Prophet (pbuh) waited for the angel Jibril (Gabriel, [pbuh]) to come. Jibril (pbuh) came and he inculcated “La ilaha illallah” into the Prophet’s (pbuh) heart three times. Our Prophet (pbuh) repeated this the same way and then taught it to Hazret (Honorable) Ali.

There are two forms of ceremonial zikr: jahri, or outward zikr, in which one’s voice can be heard by others, and khafi, or silent zikr, in which it can be heard only by oneself. The jahri style was taught by the Prophet (pbuh) to Hz. Ali and the khafi style to Hz. Abu Bakr.

The ritual ceremony of zikr is traditionally held in a Sufi gathering-place known as the dergah or tekke. In this setting the members of a Sufi tariqa (order) together intone certain Names of Allah, thereby invoking the characteristics represented by those Names into the hearts of the congregation. There is a traditional order in which Allah’s Names are mentioned in zikr, and each one is repeated several, often hundreds of times in unison by the group. Certain movements, such as swaying back and forth or turning from right to left, are incorporated into the activity during the intonations, and are likewise performed in unison. In some tariqas a prayerful rotation of the whole body, arms extended while pivoting on one foot, is traditional.

(This lamp is found) in houses which Allah has allowed to be exalted and that His Name will be remembered therein. In them He is praised in the mornings and evenings. (Qur’an 24:36)

Each of the Beautiful Names invoked during zikr is a key to a spiritual level within the heart. In the midst of such spiritual concentration, participants sometimes travel to profound dimensions of reality. This refreshment to the soul helps to provide encouragement to the murid (Sufi student) in his sometimes difficult journey to Allah. The effect of zikr in the group is to enable each one present to benefit from the augmentation of spiritual energy that a unified effort achieves. In such an atmosphere of concentrated spiritual energy, it is not uncommon for unseen beings such as angels and other spiritual personages to attend the proceedings, thereby bringing additional blessings from Allah.

Murids who have been initiated into tariqa are assigned a personal zikr, called wazifa, by their shaykh or shaykha. The wazifa is a personal spiritual prescription designed to bring the student through the levels of nafs (egoistic or animalistic nature) and to an abiding close relationship with Allah. Over time, and in response to the murid’s progress, the particularities of the wazifa may change.